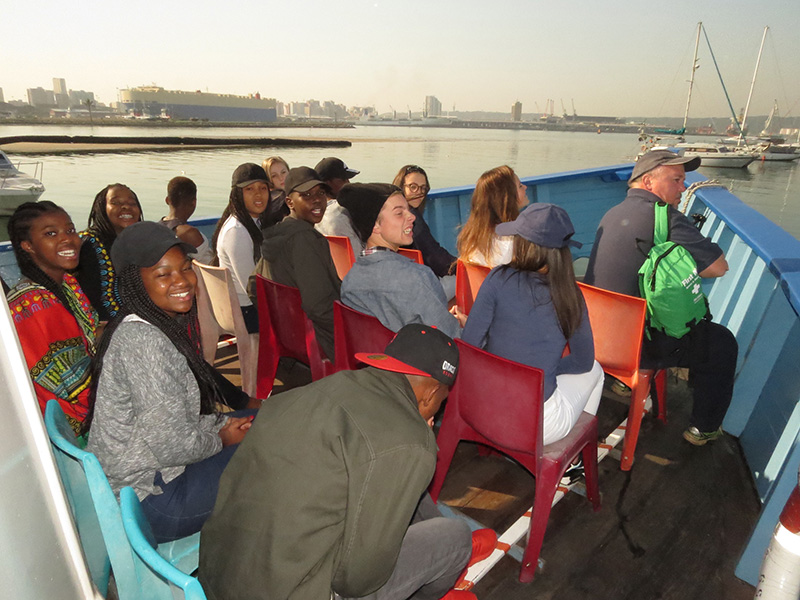 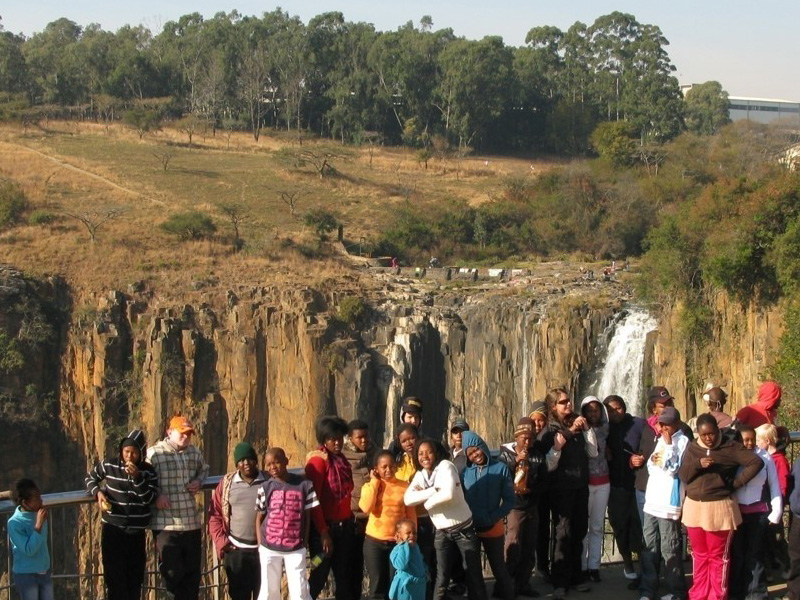 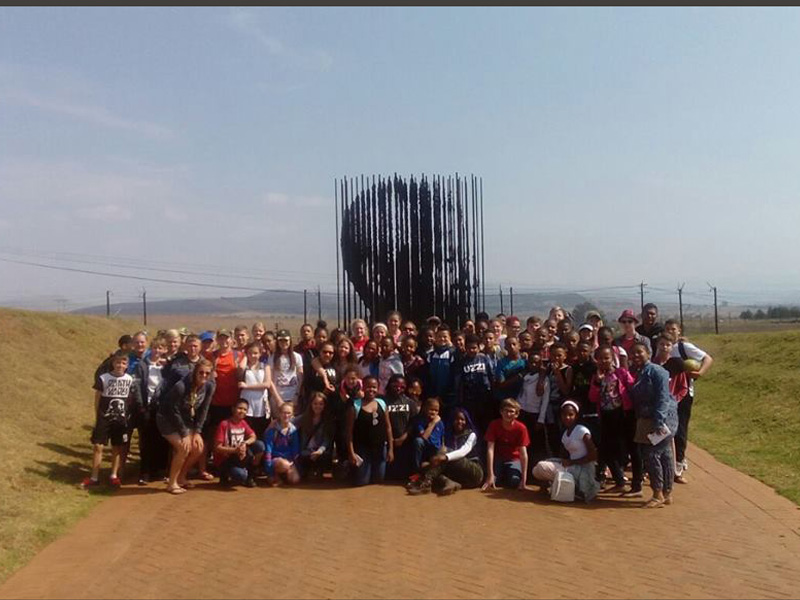 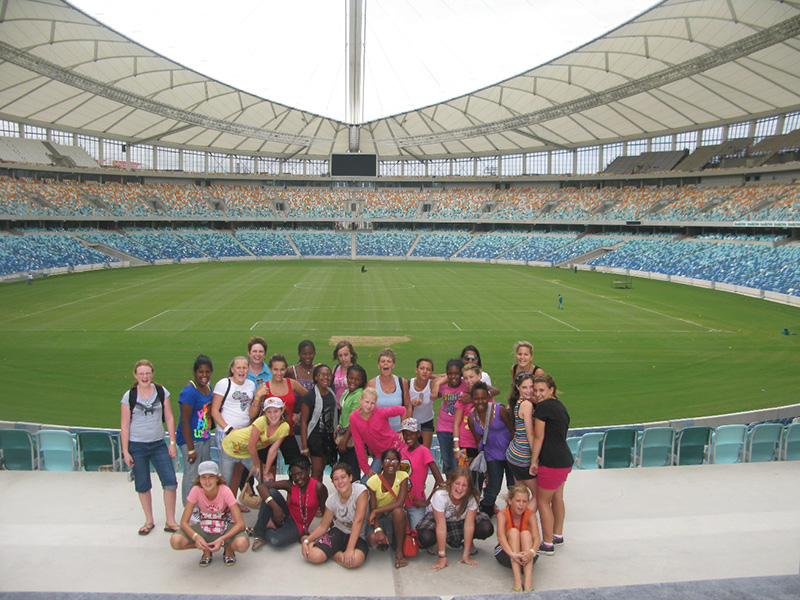 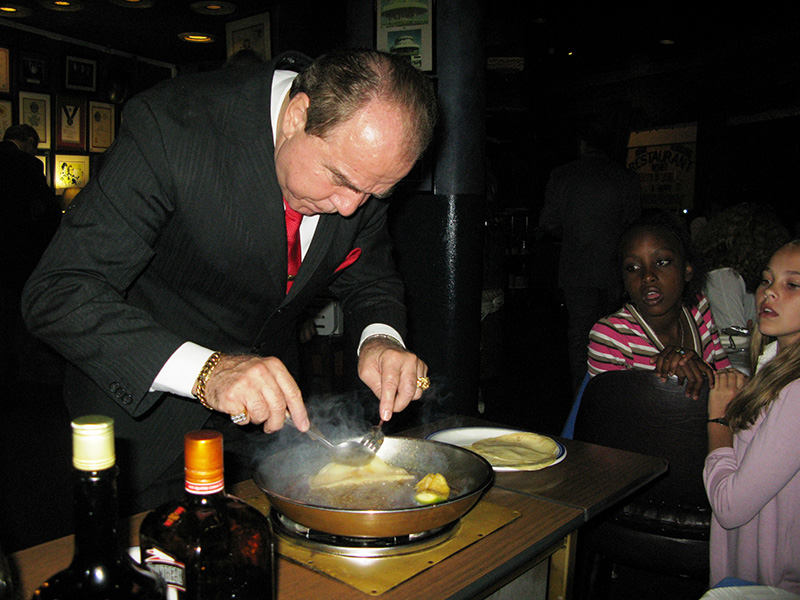 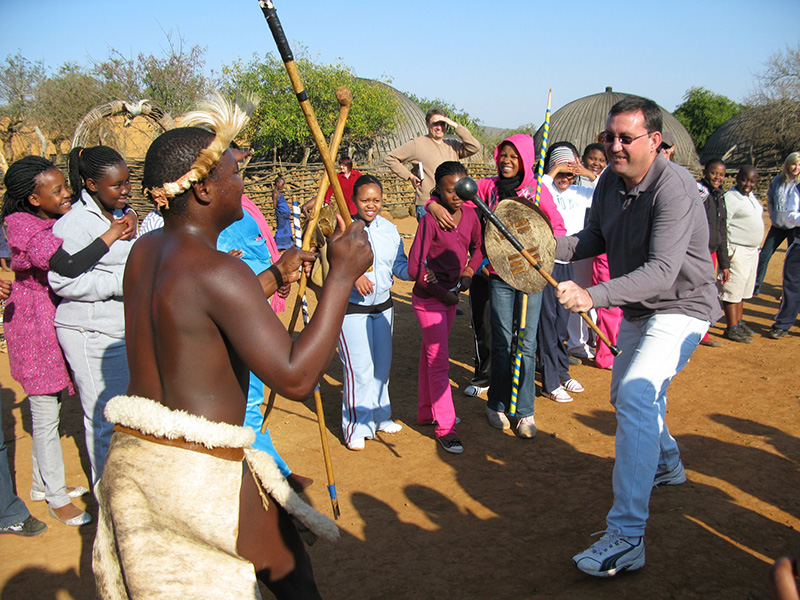 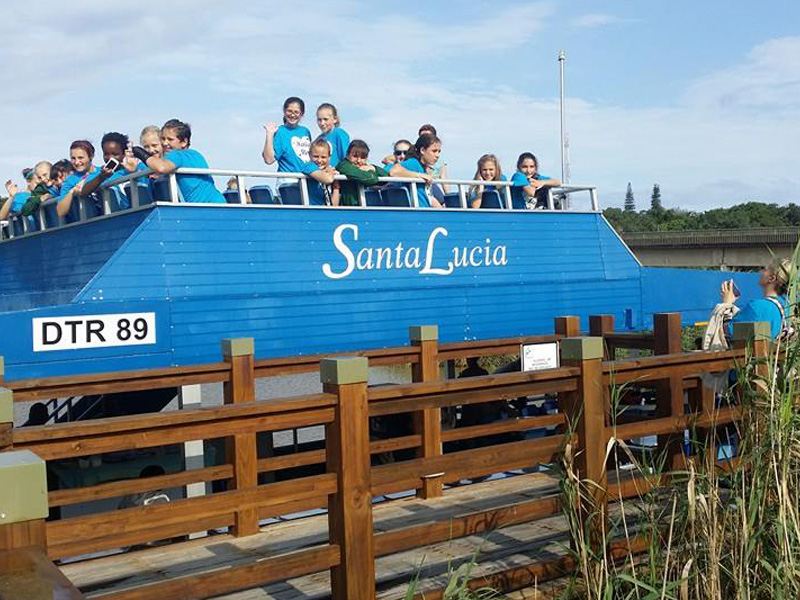 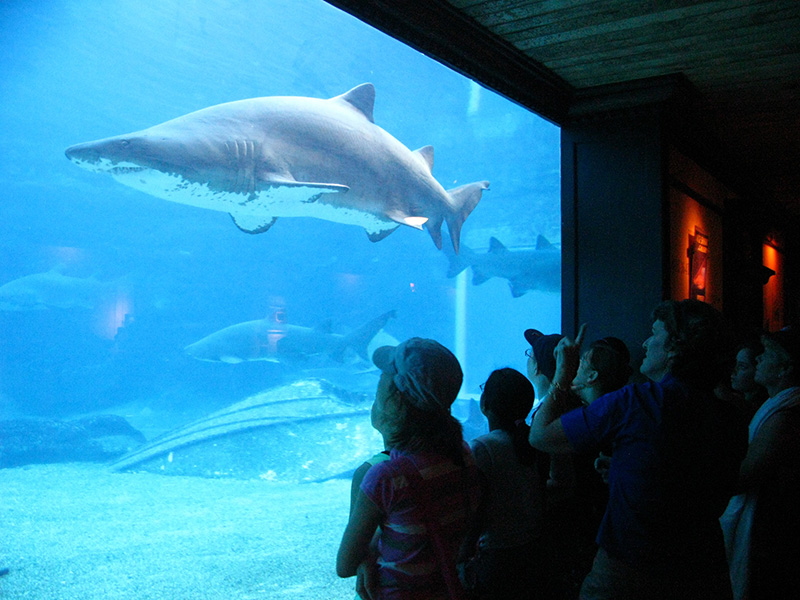 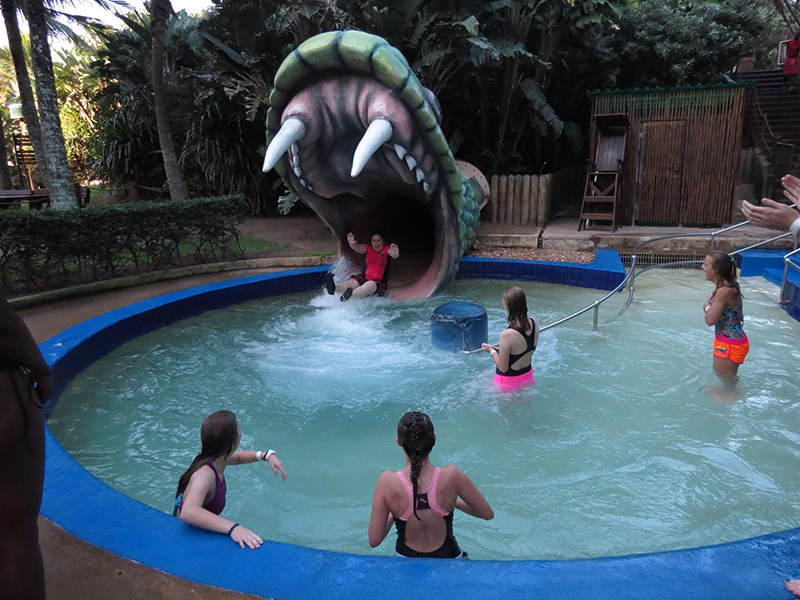 KwaZulu-Natal is the largest province in terms of population and is an amalgamation of two separate territories: KwaZulu (Land of the Zulu) in the north and Natal in the south. It was renamed KwaZulu-Natal after 1994. The vibrant Durban Harbour is the busiest and largest not only in South Africa but Africa. This coastal city was refurbished for soccer’s 2010 World Cup and the seafront promenade runs from uShaka Marine World, a huge theme park with an aquarium, to the ultramodern Moses Mabhida Stadium.
Request an all inclusive quote to the Kwazulu Natal Tour

Learners can learn about the Zulu Culture at the aha Shakaland Hotel & Zulu Cultural Village, in Eshowe ,160km north of the city of Durban or at Phezulu in a Valley of a Thousand Hills. Cultural activities such as Zulu dancing, spear-making and throwing, stick fighting, the courtship ceremony, crafts, beer making and food are discussed and experienced. Places worth a visit while visiting Shakaland in Eshowe, include Fort Nonqai Museum and the Dlinza forest and aerial boardwalk.

At the the KwaZulu-Natal Sharks Board Maritime Centre of Excellence in South Africa, tourists and learners are educated with dynamic audio-visual shows and shark dissections. The KwaZulu-Natal coastline is the only coastline with 37 beaches equipped with bather safety gear owned and maintained by this organization. They also conduct research into the sharks and other animals caught in the shark safety gear. This has already produced vital insight into shark behaviour, feeding and breeding.

Kwa-Zulu Natal’s naval history is showcased through photographs and notable displays at the Natal Maritime Museum at the Durban Waterfront. There are three ships on display and learners are allowed to explore these vessels: The Ulundi , a 75-year old vessel with a coal-fired engine, is the oldest of the three; the JR More, an oil-burning engine which is 38 years old and was not only used as a tugboat at the harbour but was also used in the salvage operations in the open seas, and though not that old, the SAS Durban, the largest ship on display is a 42 year old minesweeper.

BOAT RIDE IN THE DURBAN HARBOUR

Learning through a scenic, guided boat ride in the Durban Harbour, the biggest and busiest port in Africa, makes learning fun. The boat ride tours are especially educational for learners as the boat takes them to points of interest and shows them the route through which ships enter the harbour, discharge cargo and exit again. Get up close to the enormous ships, loading and unloading.

The Nelson Mandela Capture Site with its impressive sculpture where 50 rods of steel create something of an optical illusion, is a must-see for anyone travelling along the Midlands Meander. Visiting this site is possible for schools traveling through Howick to KwaZulu-Natal by bus. This is where we commemorate history of where Mr Mandela was waved down by the police on a quiet country road when posing as a chauffeur and arrested on 5 August 1962, resulting in the Rivonia Treason Trial and he being sentenced to spend 27 years in prison.

Nelson Rolihlahla Mandela was a South African anti-apartheid revolutionary, political leader, and philanthropist who served as President of South Africa from 1994 to 1999. He was the country's first black head of state and the first elected in a fully representative democratic election.

KwaZulu-Natal can be reached by flying to King Shaka Airport or travelling by bus. It is also possible to travel to and from KwaZulu-Natal by train. The Shosholoza Meyl Train has a route from Park Station in Johannesburg to Durban Station and back.

St Lucia, a small town which is mainly a hub for the iSimangaliso Wetland Park (previously known as the Greater St. Lucia Wetland Park)  can be part of the KwaZulu-Natal Tour. The iSimangaliso (Zulu word for “Miracle”) Wetland Park is situated on the east coast of KwaZulu-Natal and is South Africa's second largest protected natural area, after the Kruger National Park. Our visits to St Lucia include a boat ride on Lake St. Lucia (viewing hippos), the St. Lucia Game Reserve, Cape Vidal, and the Mangrove Forest.

Exciting activities such as zip lining can be arranged in Howick and Ballito. Find out that it is not as easy as it looks by learning to surf on the Addington Beach. There are various thrilling activities at Ushaka Marine World such as snorkeling in the Snorkel Lagoon, Ocean Floor walks in the Shark Ray exhibit or feeding the fish at the Open Ocean exhibit.

The KwaZulu- Natal Tour lends itself to Sports Tours such as Rugby and Netball. School visits and matches are arranged by Edutours and also include educational adventure experiences.

Our Kwazulu-Natal Tour may include: 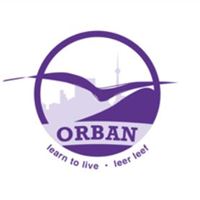 Estelle Horn
(Teacher)
Orban Private School This year would be my 5th school tour with EduTours. If you want a recommended tour, adapted to the needs of your group, this company is the answer; a company that meets your needs. Being an experienced teacher/school principal, Magda understands children. The tours always exceed our academic and social expectations. They ensure catering for the diverse customs and nutrition of our learners and their organisation is outstanding. You get value for money and the FUN factor in addition. We do a bi-annual tour. In 2017 we found ourselves in Kwa-Zulu Natal amidst a hurricane, unlike anything this area has ever seen. You might recall footage of cars being swept away and trees being uprooted but we never felt threatened by what nature dealt us. Our tour guide ensured our safety throughout, by being in contact with people in the area and rerouting us, taking the safest routes and adapting our programme as nature allowed. EduTours always put our learners' interest first. We, and I speak on behalf of the teachers, children, and parents, truly enjoy the memorable moments made. Rating

If the Kwazulu-Natal Tour isn't for you, have a look at our other offerings