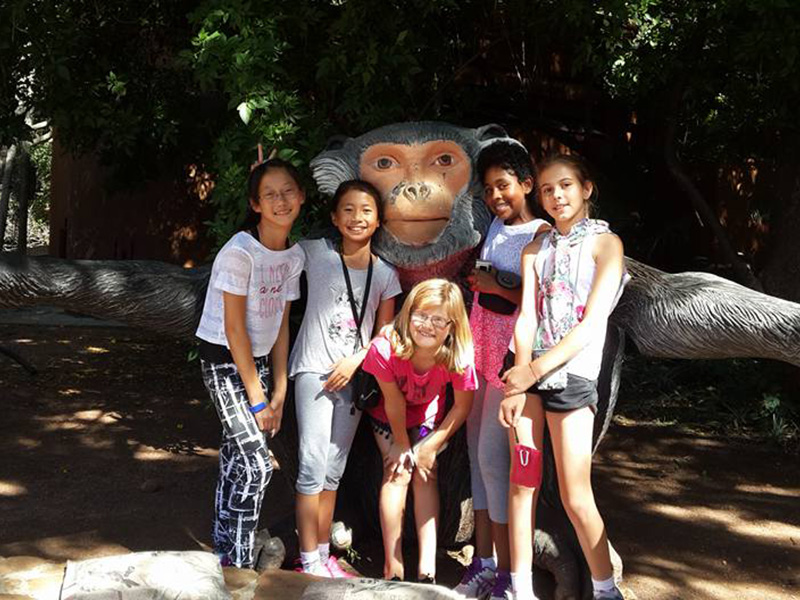 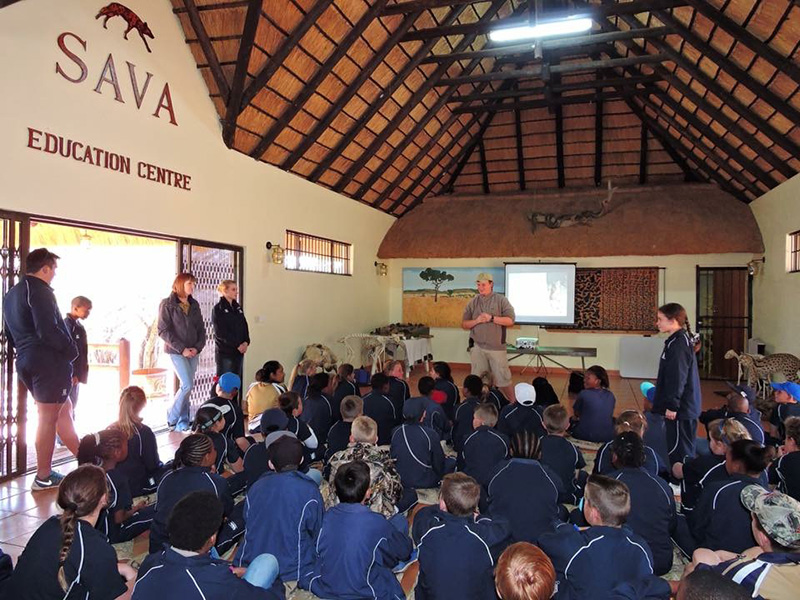 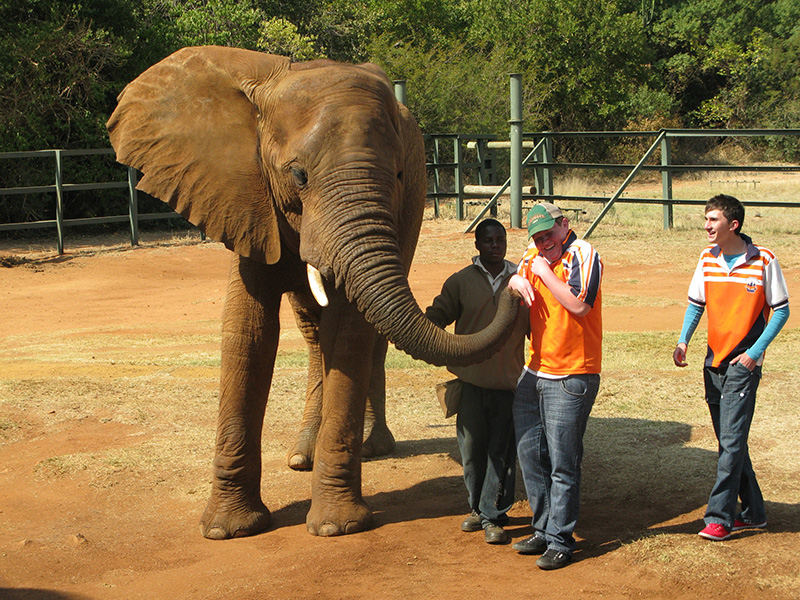 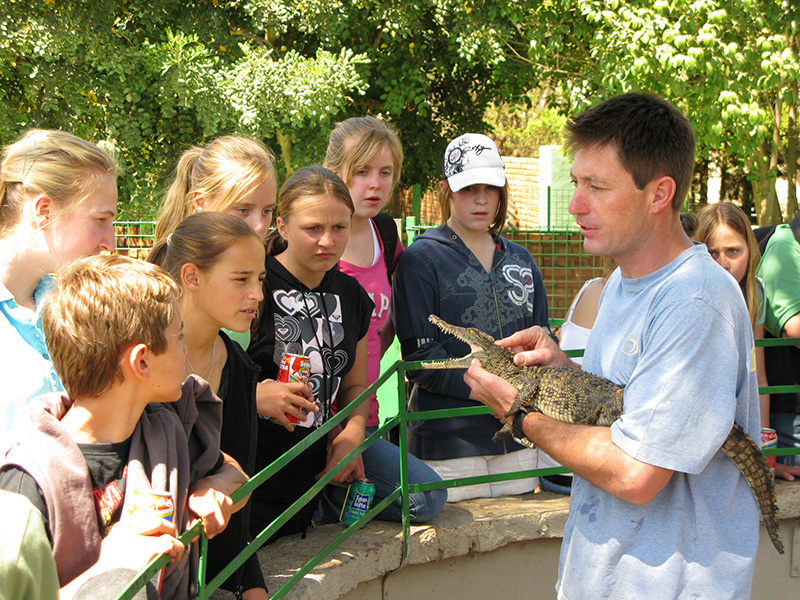 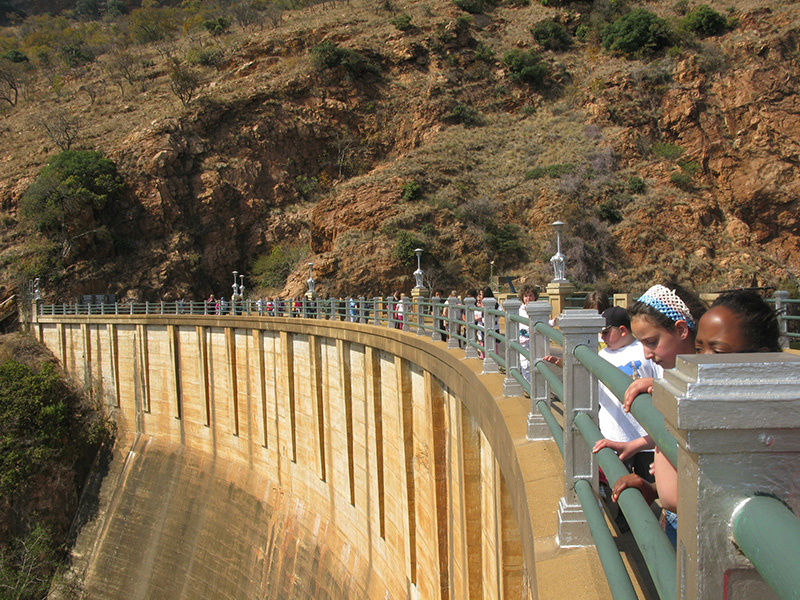 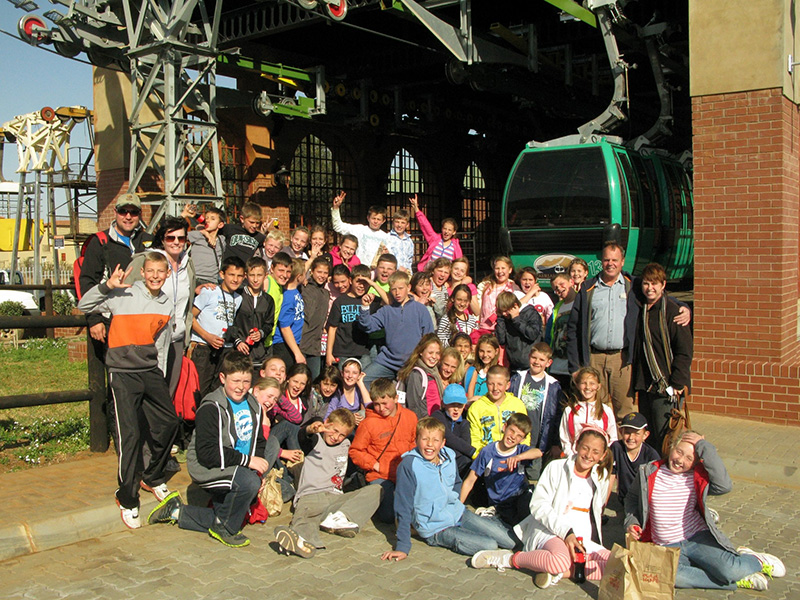 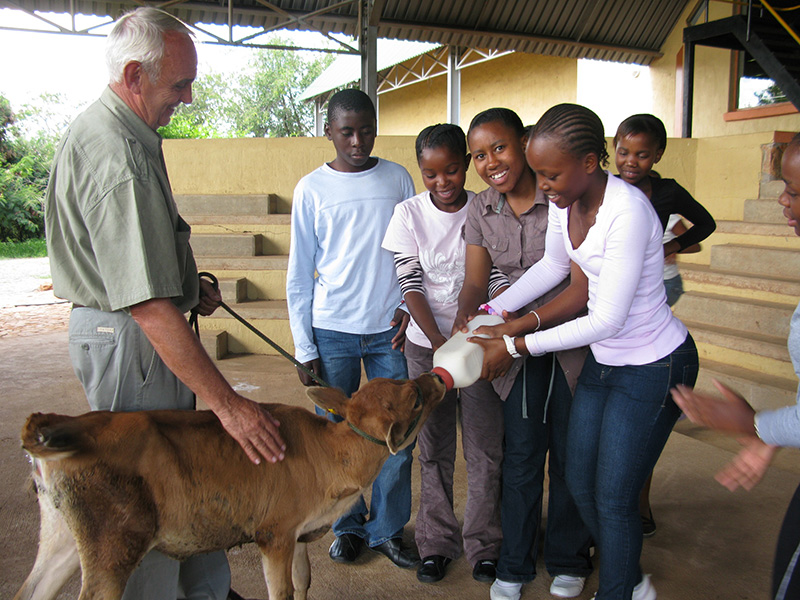 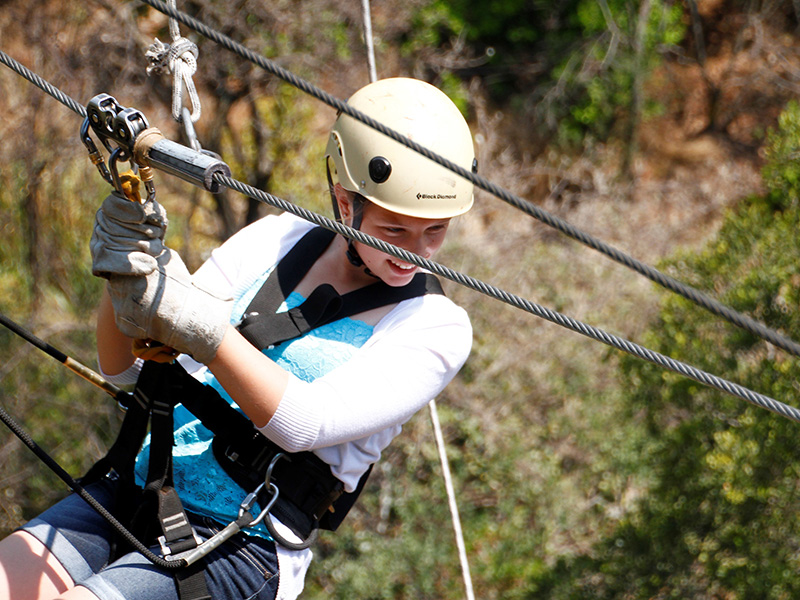 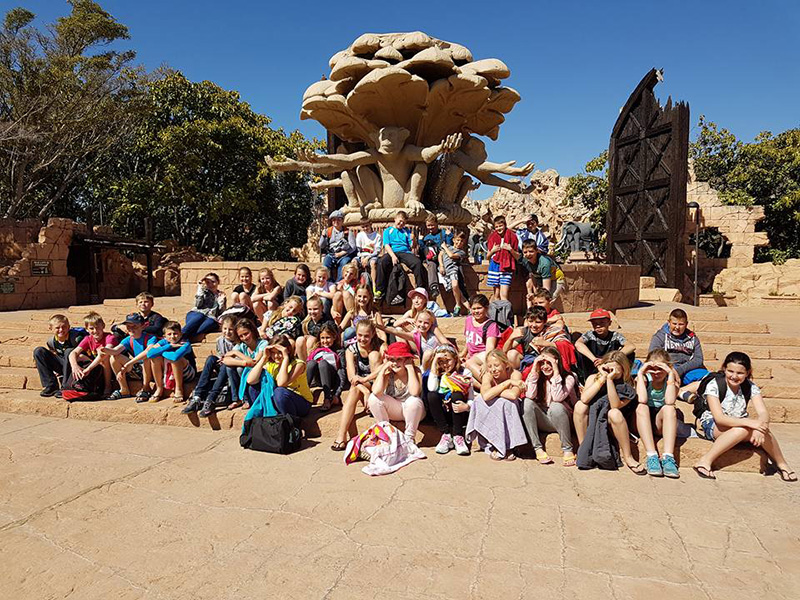 There are a multitude of places to visit in and around the Hartbeespoort Dam and our North West visits are mainly concentrated in Hartbeespoort, around the Hartbeespoort Dam. Interesting facts about the North West Province is that the mainstay of the economy, is gold-, uranium-, platinum- and diamond mining, which generates more than half of the province's gross domestic product and provides jobs for a quarter of its workforce. The economic heart of the province is Klerksdorp. The northern and western parts of the province have many sheep farms and cattle and game ranches. The eastern and southern parts are crop-growing regions that produce maize, cotton, sunflowers, tobacco and citrus fruits.
Receive an all inclusive quote to the North West Province Tour

Hartbeespoort Dam, also known affectionately known as Harties, is a man-made dam situated in the North West Province. It lies in a valley to the south of the Magaliesberg mountain range and north of the Witwatersberg mountain range. The name of the dam means "gorge of the hartebeest" (a species of antelope) in Afrikaans. This "poort" in the Magaliesberg was a popular spot for hunters, where they cornered and shot the hartebeest. The dam was originally designed for irrigation, which is currently its primary use, as well as for domestic and industrial use. The town of Hartbeespoort is situated close to the dam wall. The town of Schoemansville was named after General Hendrik Schoeman, owner of the land during the 19th century.

Situated about 35 kilometres north west of Johannesburg and 20 kilometres west of Pretoria, the Hartbeespoort and the Hartbeespoort Dam area are favourite weekend destinations for visitors from Gauteng. It is a much-loved spot for Motorcycle Rallies and Sunday morning motorcycle breakfast runs and cycling. The dam is also a popular water sport and boating destination.

The Hartbeespoort Aerial Cableway (Harties Cableway), originally constructed in 1973, extends to the top of the Magaliesberg and offers panoramic views of the Magaliesberg, Hartbeespoort Dam and the surrounding area. It is situated 1km to the east of the town of Hartbeespoort in the North West Province, and is the longest mono-cableway in Africa. In 2010 the cableway was completely revamped and modernised by Zargodox (Pty) Ltd, and officially reopened on 14 August 2010 by the then Minister of Tourism Marthinus van Schalkwyk. While gliding up the mountain with the Harties cable way you get panoramic views of Hartbeespoort Dam. Once on the mountain you can get a 360 degree view including Brits and the Moot valley.

The Elephant Sanctuary Hartbeespoort Dam is an elephant sanctuary providing a safe haven and “halfway house” for African elephants. It provides a fully guided, interactive elephant educational program covering elephant habits, dynamics, behaviour and anatomy. The main focus of the sanctuary is to educate visitors about all aspects of elephants and elephant husbandry, with the vision to release elephants into an environment where they can be more independent. During a guided tour, learners have the opportunity to touch and feed these gentle giants, always under professional supervision of experienced guides. The sanctuary is situated in indigenous bushveld in the Magaliesberg Mountains close to the Hartbeespoort Dam.

The privately owned Bushbabies Monkey Sanctuary, is situated west of the Hartbeespoort Dam, in one of the many Kloofs (Gorges) of the Magaliesberg mountain range. This 7 ha sanctuary is the perfect free roaming setting with lush vegetation, waterfalls and natural springs, to provide, a natural environment as possible, for abandoned pet monkeys. The primates are received on the basis of public donations and are supported by funding generated by the guided tours in the Bushbabies Monkey Sanctuary and the sales of curios at the entrance. A well informed guide takes the group on a walk through natural indigenous forests, on elevated wooden walkways. Learners experience and learn about a variety of exotic primates such as the Squirrel, Spider and Capuchin monkeys. Edutours agree with the goal of the sanctuary to, not only provide these primates with an opportunity to live as they would in the wild, but also, through the guided tours, they create an awareness and learners are educated that monkeys do not make good pets. That they are better suited to a natural, free-living environment.

Pretville is a film set, built and owned by Hartiwood films and the only film set in South Africa that is open to the public. Hartiwood films is famous for the Afrikaans films such as Liefling, French Toast and Pretville. There is a film theatre where the learners can view the film after they have explored the film set. The owner and renowned film producer Paul Kruger has educated our tour groups, visiting Pretville, about the art of film making.

The Jasmyn Dairy Farm is a world renowned modern-day dairy farm. The cows are directed to enter a shed to stand on an ultra modern carousal, when they are milked. Each cow has a transponder around her neck which gives the farmer exact data such as who she is, on how much milk she gives, when she last had a calf and whether she’s on medication. Before the milking machine is attached the cows are tested for Mastitis. The cows stand on this revolving carousal until it has revolved once. By then the milking process is done and the milking machines detach automatically. The cows wait patiently to leave the carousal at the exit, close to where they entered the shed. During our visit the learners learn about the anatomy of milk cows, they get to bottle feed a calf and sometimes also get a squirt of milk directly from the source. They can then view the cows being milked and are treated to drinking yogurt and a piece of cheese. A visit to the Jasmyn Farm Stall, with its distinctive landmark, a large Dutch Windmill, where all the farm’s products are sold is always enjoyed. This farm stall is well known and loved by both Hartbeespoort locals and frequent visitors to the area.

SUN CITY VALLEY OF THE WAVES

Spending a day at the legendary Roaring Lagoon, where bender waves rise two metres in the air every 90 seconds, is undeniably the main attraction at the Sun City’s famous water park, the Valley of Waves. This is where you can catch the tide and body-surf to shore. A day trip to the man-made-inland-sea includes, lazing beneath wind wept palm trees, lunch and taking your pick of the mild to wild water rides. For the more adventurous, the rides may include: The Viper, The Mamba, Tarantula, the Scorpion, Boomerango and Nobles Decent. It this is not your cup of tea then you can relax on the Lazy River, gentle, non-stop tube ride around an island

De Wildt Cheetah and Wild Care Centre is renowned for its successful breeding of cheetah and wild dogs. On our tour we may encounter the King Cheetah and a vulture enclosure.

Wildlife, up close and personal

The North West Tour will defiantly satisfy any fascination you might have to interact with our South African’s Wildlife. Here the learners will be able to touch and feed elephants, have a snake wrapped around your neck, hold a baby crocodile, learn about cheetahs and wild dogs and play with a lion cubs.

The North West Province has plenty to offer the adventurous, adrenalin seekers. Zip lines are always popular. If you have not satisfied your thirst for adventure at the Valley of Waves, zip lines such as The Magaliesberg Canopy Tour and Ama Zwing Zwing zip lines are well worth the visits. Early morning, although not normally part of our tour, you might get a glimpse of Hot Air Balloons of Bill Harrop’s Original Balloon Safari’s, where they effortlessly sail over the awakening landscape.

Our North West Province Tour may include: 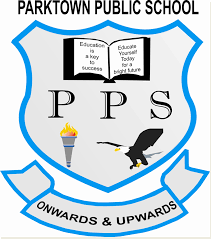 Margaret Sema
(Teacher)
Parktown Public School The service given was very excellent. Everything went according to plan. He, Freddie was very approachable and bent over backward to accommodate us. I would like to use this company again. Rating

If the North West Province Tour isn't for you, have a look at our other offerings