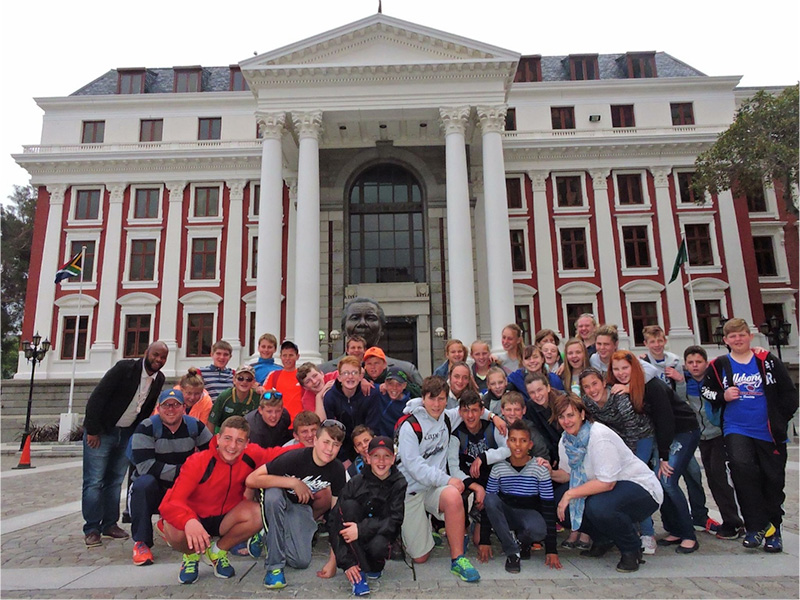 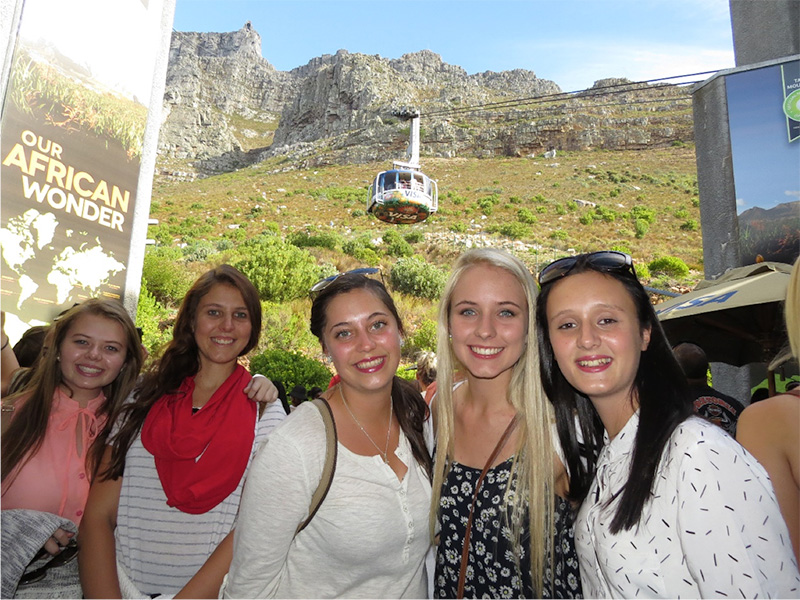 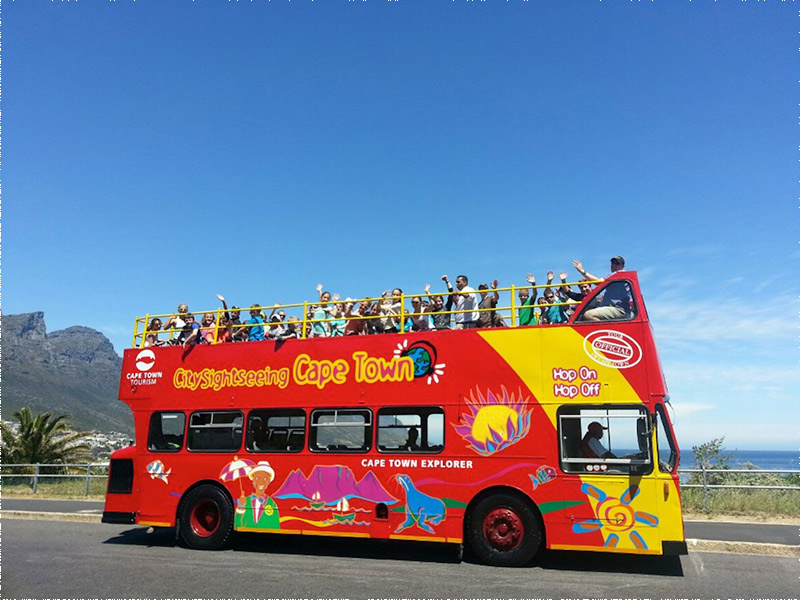 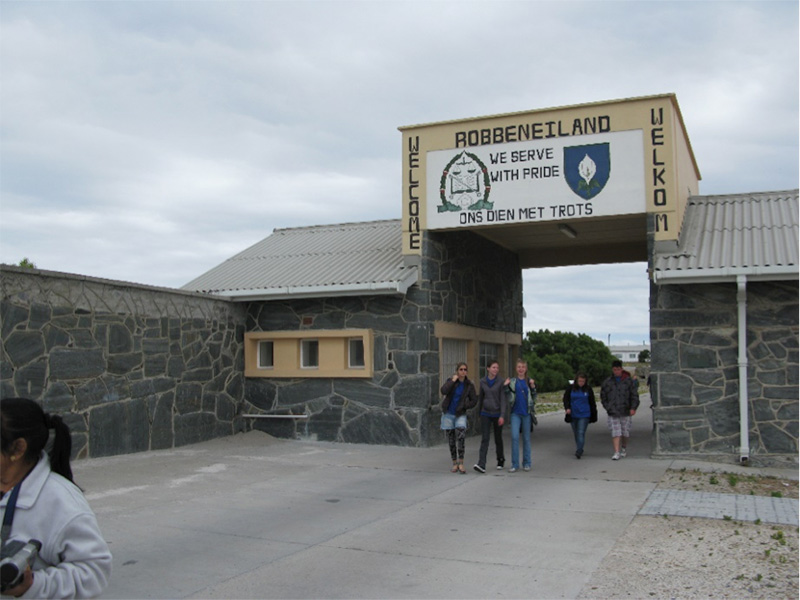 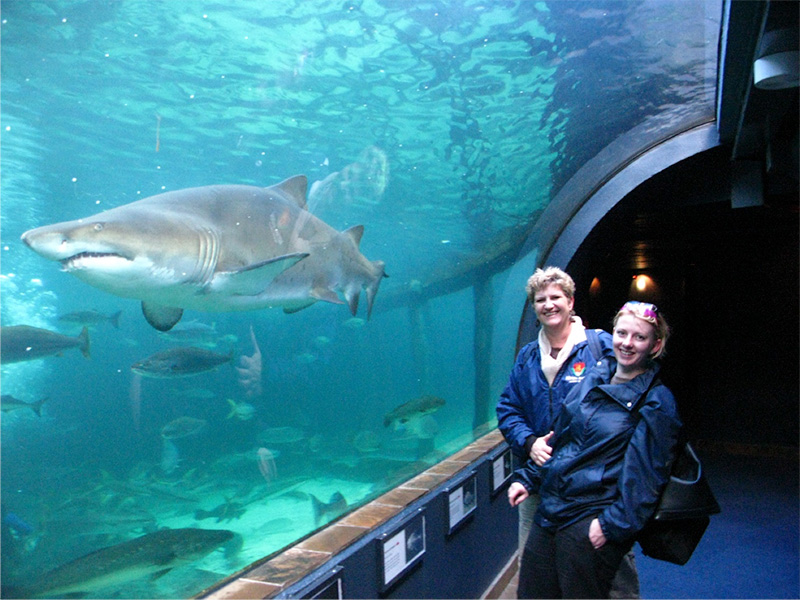 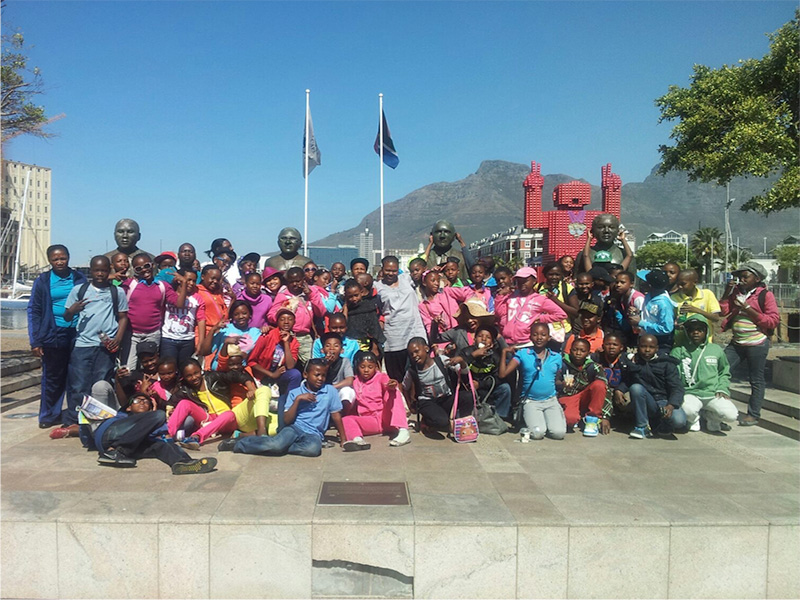 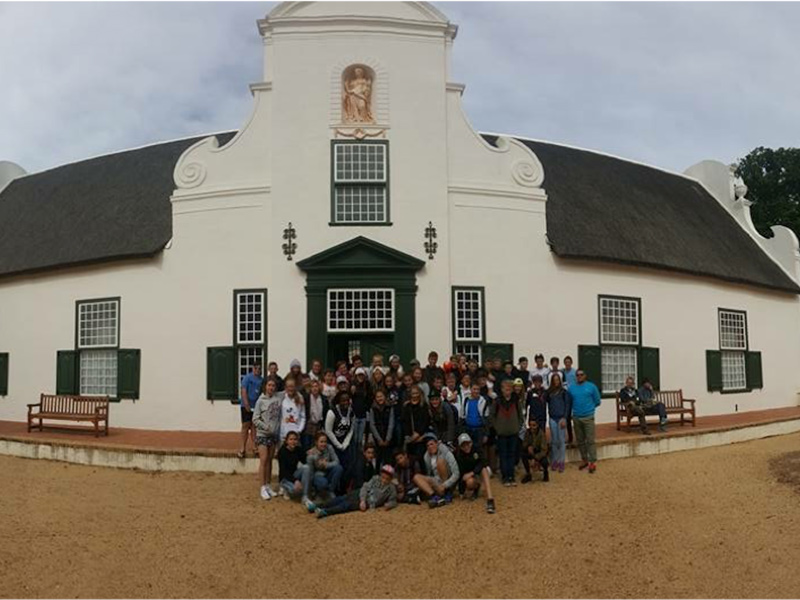 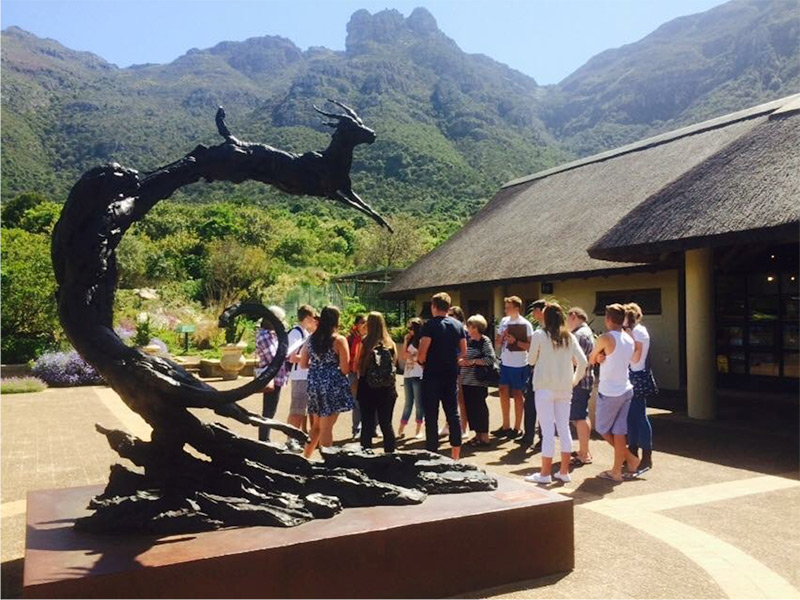 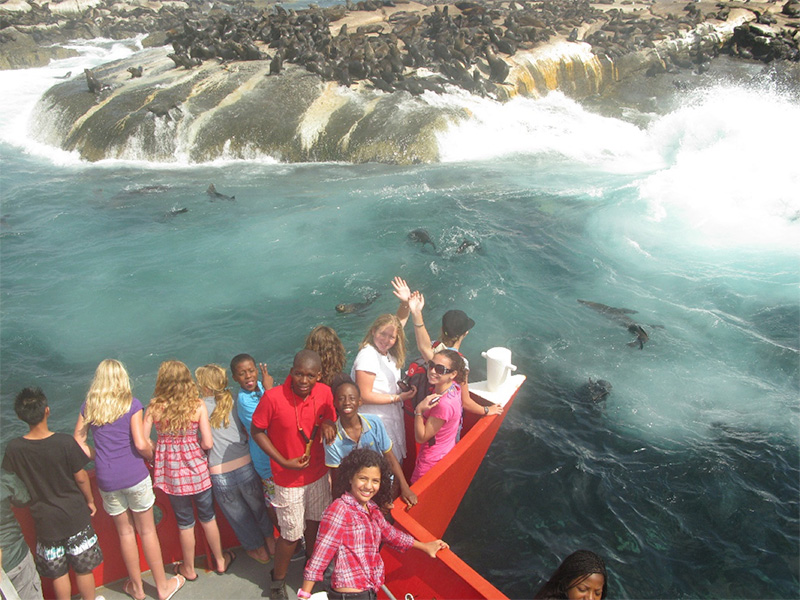 The Western Cape Tour is one of our most popular and unforgettable school tour destinations. It offers a rich variety of educational, historical, environmental, tourism and hospitality experiences.
Request an all inclusive quote to the Cape Town Tour

According to a Cape Town tourism campaign, Cape Town is one destination with six unforgettable experiences. These are: Table Mountain, Cape Point, Robben Island, Kirstenbosch, Groot Constantia Wine Farm and the Victoria & Alfred Waterfront. EduTours frequently includes these destinations and many more in our Cape Town Educational School Tours. Cape Town is regularly ranked as one of the world's best travel destinations by various travel and leisure institutions. An introductory overview is provided by the Open Top Bus Tour of the city.

Table Mountain is a flat-topped mountain forming a prominent landmark overlooking the city of Cape Town in South Africa. It is often the first landmark which tourists see as their flights descend into Cape Town International Airport. The mountain forms part of the Table Mountain National Park. Table Mountain and it's two neighbouring peaks: Lion's Head and Signal Hill offer stunning views of Cape Town, and provide adventure-seekers with hiking opportunities of various difficulty. Sunset viewing atop Signal hill is a favourite pastime for local and foreign visitors alike. The Table Mountain Cable-cars offer an approachable method of summiting the 1055m peak. Once you reach the top, there's a restaurant for the hungry and a curio shop for those looking to take some memorabilia back with them. Be on the look out for the Dassies- a relative of the Elephant- that call the mountaintop home.

Rugged rocks and sheer cliffs towering more than 200 metres above the sea and cutting deep into the ocean, provide a spectacular background for the reserve’s rich bio-diversity. Cape Point falls within the southern section of Table Mountain National park. The natural vegetation of the areas – fynbos – can be found all over the Cape Floral Kingdom, the smallest but richest of the world’s six floral kingdoms.

The name is Dutch for "Seal Island." Nobel-Prize winner and former President of South Africa, Nelson Mandela was imprisoned there for 18 of the 27 years he served behind bars before the fall of apartheid. Two more of South Africa's former presidents were also imprisoned on the island during the country's tumultuous political history. Today, the prison has been decommissioned, but daily tours of the island are offered, giving visitors a chance to learn about the country's history. The island rests just a couple of kilometres off the western coastline of the city, and can be seen from the top of Table Mountain.

Kirstenbosch is an important botanical garden nestled at the eastern foot of Table Mountain in Cape Town. The garden is one of ten National Botanical Gardens covering five of South Africa's six different biomes and administered by the South African National Biodiversity Institute. The Kirstenbosch Educational Centre offers various programmes where learners can learn about the fynbos biome.

Groot Constantia is not only South Africa's oldest winery (founded in 1685), but is also a Provincial Heritage Site. The original farm was around 764 hectares and sports a typical Cape Dutch style of architecture at the Manor House. We learn about wine making and viticulture during a guided tour through the Groot Constantia wine cellar.

The Victoria & Alfred Waterfront is situated on the Atlantic shore. Departures to Robben Island take place at the Clock Tower. This Waterfront also houses the Two Oceans Aquarium where you can view more than 3000 marine creatures in 7 different exhibition areas and learn of the two oceans surrounding the Cape.

One of the most requested transport methods to travel to the Western Cape from Gauteng is by flying. The flight is just under two hours, and passes over the Karoo, Table Mountain, and very often, loops out over the Atlantic before touching down at Cape Town International Airport. An alternative is to fly to Cape Town and return by train, the Shosholoza Meyl. A 2-day overnight ride, offers some spectacular views and gives learners an unforgettable experience. During this tour, the learners experience four forms of transportation: train, bus, boat and plane.

The Western Cape is famed for the wines produced in this province. Stellenbosch, Franschhoek and Paarl are the biggest towns that comprise The Winelands. Once you venture outside of the Mother City, it seems as though there's a wine farm at every turn. We visit various places of interest in The Winelands.

We enrich our Cape Town Tours by combining it with theatre visits, fine dining experiences and an adrenalin fuelled ride at the Toboggan track at Cool Runnings.

The Western Cape boasts some of the most beautiful beaches in the world. Although the water of the Atlantic Ocean is extremely cold, we do visit beaches lapped by the warmer waters of the Indian Ocean.

Our Western Cape Tour may include: 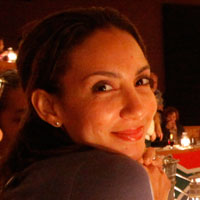 Sylvia Sylveste Thank you so much for this awesome week! We all really enjoyed this trip! And I'm already looking forward to coming back again soon! Rating

Karen Swanepoel
(Deputy Head)
Laerskool Jan Celliers For the past 10 years, Edu School Tours has been enriching our school curriculum in unbelievable ways. Edu School Tours' competent staff annually designs tours and day outings according to our academic demands. The theme of Apartheid is better understood after a day excursion to Soweto, visiting the Regina Mundi Church, the Hector Peterson Museum, Freedom Square and Nelson Mandela's old house in Vilikazi Street. During a walking tour in the streets of Johannesburg, the story about the discovery of gold comes to life. After learning about the Anglo Boer War, learners value a day excursion to Pretoria where Paul Kruger's house, Fort Schanskop, Melrose House and the Union Buildings are explored. All learners look with great expectation towards the annual grade 7 History tour to Cape Town. During this tour almost the whole South African History curriculum is covered; by means of a visit to Parliament, the Castle of Good Hope, Cape Point, Groote Schuur Hospital Museum (first heart transplant), etc. Edu Tours also highlights our calendar with unforgettable sport tours. Rating

If the Western Cape Tour isn't for you, have a look at our other offerings